Posted: October 19, 2020 Under: Information Technology By Gwen George No Comments

It seems like just about everything is getting smart these days. First it was our phones, then it was our cars and homes, and now our watches are getting smart too. In many ways, this evolution in everyday life was almost inevitable. Movies and books have been predicting this for decades, with people talking into their watches – usually spies – or astronauts using wearable tech.

Today, a smartwatch isn’t necessarily smart all on its own. They need another device – usually a smartphone – to talk to and to feed it information. The watch is simply another conduit for the smartphone, or an extension of what the smartphone can do.

When Does It Become Smart?

For the last century, watchmakers have been looking to add extra features to their devices in order to make them more appealing. In the beginning, added extras included radios or televisions, analog maps, note pads for memos (with an attachable keyboard), and even a built-in calculator (which were banned in so many schools in the 80s and 90s, especially during Math tests).

It was all about creating something that was multi-functional, instead of a simple time piece. With the rise of regular mobile phones, watchmakers tried to connect their devices to this new tech in order to stay relevant. If we were all carrying phones with clocks on them, why would we need to wear a watch?

Then, in 2012, the first ever smartwatch was released. Sony created a watch that connected to their Xperia smartphone and called it SmartWatch. It was the Pebble and the Omate TrueSmart smartwatches, however, that really revolutionized the industry the following year. 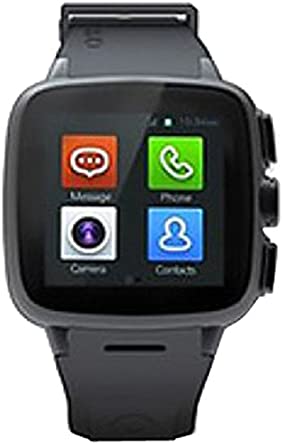 Computers On Your Wrist

The smartwatch isn’t actually as smart as it suggests. The earlier digital watches made by the likes of Casio, Seiko and Pulsar were more like the name smartwatch suggests. They had built-in computing power and didn’t rely on another device to operate. However, these were very primitive compared to what a modern smartwatch is capable of.

Today, every big smartphone creator has a smartwatch or two to pair with their phones. That is the crux of how a smartwatch works – it pairs with a phone and acts as an extension of the device rather than being a standalone computing device. Without that link, your smartwatch will not have its full functionality.

A smartwatch uses the internet and mobile connection of the smartphone to do most of the things that it is designed to do. This includes receiving and receiving messages and emails, notifying you of calls, doing online searches, and activate a range of apps and accessories on your smartphone. Some even allow you to take photos via your phone by pressing the shutter on your watch.

As far as standalone functions go, smartwatches can do quite a number of different things. For one, they actually do have a working clock for telling the time on. You can also usually set timers, countdowns and alarms on your smartwatch and can even enjoy a bit of Canadian gambling. GPS and other fitness tracking capabilities are built into many of the top smartwatches on the market now too.